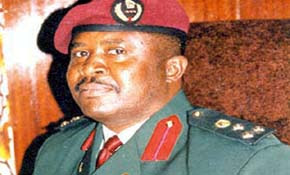 By Lloyd Gumbo
MDC-T leader Mr Morgan Tsvangirai is a national security threat rather than a political one and security forces are justified to participate in politics to defend the country, Brigadier-General Douglas Nyikayaramba has said.

Responding to calls by Mr Tsvangirai at a rally in Mkoba, Gweru, on Sunday that security chiefs should resign and contest for political power, Brig-Gen Nyikayaramba, said the current situation required them to deal with it in uniform.

"What he (Mr Tsvangirai) is saying is nonsense. We are dealing with a national security threat, which can only be dealt with by people in uniform. If it was a normal political environment, one would hope to retire at some point and join politics. However, we can't afford to be in an akimbo when there is this foreign attack," Brig-Gen Nyikayaramba said.

For this reason, he reiterated that he would not serve under the leadership of anyone who did not have liberation war credentials.
Brig-Gen Nyikayaramba said security forces would do anything possible to make sure President Mugabe remained in power until they felt the threat was over.

"Tsvangirai doesn't pose a political threat in any way in Zimbabwe, but is a major security threat. He takes instructions from foreigners who seek to effect illegal regime change in Zimbabwe.
"This is what has invited the security forces to be involved because we want to ensure we protect our national security interests. When he said Mugabe must go peacefully or else forcefully, was that democratic or constitutional?

"Daydreamers who want to reverse the gains of our liberation struggle will continue daydreaming. They can go to hell . . . they will never rule this country.
"We cannot keep quiet. We will continue speaking and as the security forces, we will not sit back and watch things going wrong," Brig-Gen Nyikayaramba said.

He said MDC-T was not home-grown.
Brig-Gen Nyikayaramba said security forces were not against the formation of other political parties, but were concerned with some hidden hands in some of the parties that sought to influence leadership change through unco-nstitutional means.

"If his party was a genuine indigenous political party, we wouldn't be involved. People have to understand that our mandate as security forces is to make sure we protect our sovereignty and the integrity of the nation.

Brig-Gen Nyikayaramba said President Mugabe would remain in power because replacing a leader in the middle of the struggle was not advisable.
"President Mugabe will only leave office if he sees it fit or dies. No one should be talking about his departure at the moment. He sacrificed a lot for this country. If he was someone else he would have opted to work for those international organisations but he knew that Zimbabweans wanted his guidance.

"We will die for him to make sure he remains in power. We are prepared to stand by our commander-in-chief. Soldiers are not going to sit back and watch, while the foreign forces want to attack us."
He said MDC-T sponsors should realise their party would not achieve the desired goals.

"If people were clever enough they would have de-invested their money in this project because it's not viable. It's almost 11 years now since the MDC-T was formed but it still hasn't delivered anything?" said Brig-Gen Nyikayaramba.

On Sunday, Mr Tsvangirai challenged service chiefs, saying: "If you want politics remove the uniform and we will show you what politics is. It is not guns. Stop intimidating people - convince Zimbabweans to vote for you."

"Everyday, they (security chiefs) are dabbling in politics, even seeking to influence the date of the election and the conditions under which that election will be held."When the Police Commissioner-General (Augustine Chihuri) and the Attorney-General (Johannes Tomana) state publicly that they support a particular political party in an inclusive government, as in our case, the rule of law becomes perverted and people lose confidence in the institutions they lead.

Source: The Herald ( Zimbabwe)
Posted by RAUL NOVINTE- KEEPING THE DREAMS AND GOD´S VISION ALIVE) at 6/23/2011